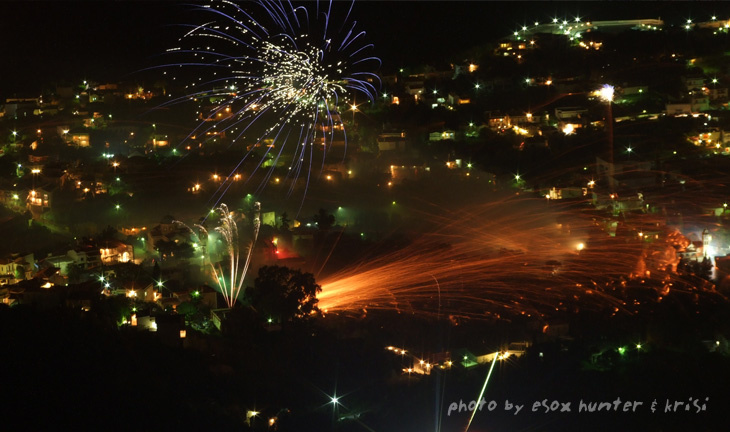 Rouketopolemos nowadays is a spectacular traditional event which takes place in Vrontados all night long on Easter. This is a bloodless “war” between the churches of Saint Mark (Agios Markos) and Virgin Mary of Erithiani (Panagia Erithiani) which are located on the top of two opposite hills.

The rockets consist of two parts, a handmade cylinder that contains a mixture of nitro, sulfur and charcoal which has a fuse at its end and a piece of long and thin wood, where the cylinder is tied on. The rocketwar has replaced the small cannons and weapons called “sourntada”, which the people of Vrontados used during the Turkish domination on Holy Saturday and caused strong explosions. With the fear that this could lead to an outbreak Turks revoked the cannons and weapons in 1889, and so the villagers replaced them with rockets. The parishioners from each church get prepared for this particular wonderful night for whole year to happen this fest when the sky is colored in red from the lights of the rockets and the sounds of the bells are heard far away.

Every year, on the 1st of January the traditional event with the fest of ships’ models takes place in the central square of Chios (Vounaki square).  The event began in the honor for the Greek victories in naval battles during the Balkan wars, from the residents of Chios, Psarra and Minor Asia. Several teams from different neighborhoods of the city get prepared for this day, starting in the June, by hand making merchant vessels or battleships from 0.5 m to 2 meters long. Every team presents its ship’s model, that has a given name by the team and then with the accompany of a trabouka (local musical instrument) or sometimes other musical instruments they sing carols which are wishes for the New Year and many times they satirize local political acts. In the end the best team with the best model is awarded with money and afterwards they wander their ship through the neighborhoods of Chios singing carols. Each year, even more teams participate, for which the more important thing is not only the award, and the attending and maintaining this traditional event.

This traditional event has its roots in Turkish domination and makes fun of the Turkish trials then. Agas is a strict Turk judge and he is elected by the villagers. The preparation for this traditional event takes place from the early morning and around 11 a.m. the judge enters the central square on a donkey along with the prosecutor throwing confetti. When the court begins, noone from the attendants can escape from the judge’s strictness. Depending on the penalties everyone has to pay money, which goes to the local cultural union, or sometimes get hit with a plastic club.

This traditional event takes place in Thimiana and has its roots in the middle ages. While the villagers were celebrating a “Cheese Eating Friday”, pirates were attacked the village in order to steal mastic. The residents were informed for the attack by the sentinel and took their weapons to fight. They won against the pirates and hung them in the central square.The next year they repeated their victory. From then every year, the last Friday of the Pre-Lenten Season, the villagers dress up with old women's cloths or men’s clothes and hide their faces with handmade masks. On Sunday they gather in the village and perform a traditional impressive dance called talimi, that represents the battles of the locals against pirates. After that they sing a warrior chant in accompany by musical instruments and head towards the church of Saint Eustratius (Agios Efstratios in Greek), where they hang labarum’s and flags of Chios on the churches railing. Nowdays Mostra has been enhanced with modern disguises.